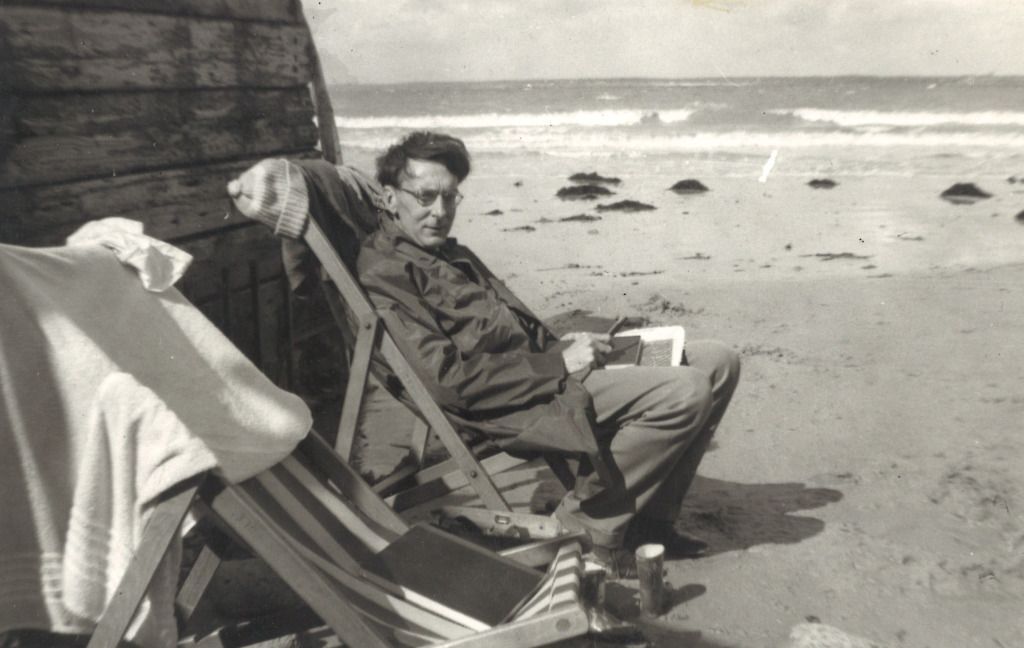 Yorick Smythies was born on 21 February 1917 in Shanklin on the Isle of Wight. An anecdote of young Yorick has it that he put a sign on his door at the age of five: “Do not disturb: reading Plotinus.” (Conradi 2001a: 4) The original source of this anecdote is unknown to us. Peter S. Conradi implies that it was Iris Murdoch (1919–1999). The anecdote is told somewhat differently in his biography of her (cf. Conradi 2001b: 381). Smythies later was a student on the Moral Science Tripos from October 1935 to June 1939 at Kings College, University of Cambridge. He began attending Wittgenstein’s lectures in the academic year 1935/36 at the age of only 18, but made Wittgenstein’s acquaintance not before 1938 through James C. Taylor (1914–1946) (cf. Bouwsma 1986: 66). Smythies made only sketchy notes in 1935/36. He began to take fuller notes in 1938, when Wittgenstein resumed lecturing after an absence of one and a half year. Smythies left Cambridge a year after graduating in June 1940. As a conscientious objector, he got unconditional exemption from military service (WC: 320, Wittgenstein to N. Malcolm, 26 March 1940). He returned temporarily to Cambridge in November 1940 and January 1941, and again took notes at Wittgenstein’s lectures.

From a job application form that he filled in in 1967, we know that he worked from 1942 until 1945 as a local investigator for the Nuffield College Social Reconstruction Survey in Oxford, which was set up to inquire into the economic prospects of regions across the country in view of the negative effects of the ongoing war. In 1944, Smythies taught a course at the University of Oxford on the philosophy of George Berkeley. In the same year, he converted to catholicism. Wittgenstein felt partly responsible for this step, as he said, because he had encouraged Smythies to read Kierkegaard (cf. Monk 1990: 463f., WC: 363). Smythies returned to Cambridge in May 1945 or earlier, where he worked for the library of the Cambridge Philosophical Society, now part of the Cambridge University Library. Although he is reported to have attended lectures in the last period of Wittgenstein’s professorship, he seems to have made little or no notes during this time. He referred to his notes, mostly from the period of 1938 to 1940, as the Whewell’s Court Lectures, named after the location, Whewell’s Court at Trinity College, where the lectures took place. He stayed until Wittgenstein resigned his professorship in summer 1947, which put an end to Wittgenstein’s lecture courses.

In the same year, Smythies moved back to Oxford, where he worked as a university librarian and became a friend of philosopher and writer Iris Murdoch. Murdoch portrayed him in the character of Hugo Belfounder in her first, highly acclaimed, novel Under the Net of 1954 (cf. Conradi 2001: 4). Smythies received a copy with her dedication to him and his first wife, which an antiquarian from London sold for 7800 USD in 2014. Smythies wrote extensively himself, both philosophy and poetry, but published only notes from Wittgenstein’s lectures and a review of Russell’s History of Western Philosophy during his lifetime (cf. Smythies 1947). In this review, he makes a very effective use of quotations and questions in order to exhibit the lack of genuine elucidation in what Russell says about the subject. Smythies’ main point goes beyond the purpose of a book review, namely, that there is a tendency in philosophy, on the side of writers as well as readers, of becoming accustomed to not taking one’s discussion seriously (cf. Smythies 1947: 81). Wittgenstein read the review and commented on it in a letter to Smythies of 27 July 1947: “I got a copy of ‘Changing World’ and have read your review and it isn’t bad, I think.” (WC: 413) (The review can be downloaded from this site.) Smythies worked for years to prepare his often barely readable lecture notes for publication: rewriting them, re-organising them and typing them, or recording them in order to have them typed. Notes by Smythies were incorporated in Wittgenstein’s Lectures and Conversations on Aesthetics, Psychology and Religious Belief (published in 1966) and the Lectures on the Foundations of Mathematics (published in 1978). But his attempts to publish the Whewell’s Court Lectures in the second half of the 1970s, first with Blackwell and then with Oxford University Press, failed owing mainly to his unwillingness to compromise.

In the last years of his life, Smythies was afflicted with emphysema, to which he succumbed in 1980 without publishing anything else from his lecture notes or his own writings. He had prepared the “Lectures on Freedom of the Will” and two lectures on volition for publication in C. Grant Luckhardt’s Wittgenstein: Sources and Perspectives. But the volume appeared in 1978 without these items. Wittgenstein’s “Lectures on Freedom of the Will” were published only in 1989 by his second wife Peg and Rush Rhees, whom she married after Yorick’s death. A first inventory of the items referring to Wittgenstein’s lectures in Smythies’ corpus was made in 1998 by Volker A. Munz. In 2001, the original notebooks were sold without the copyright to Kagoshima University, Japan. To date, no inventory exists of Smythies’ own writings. His literary estate is kept at the University of Klagenfurt, to where the rest of his papers were moved after Peg’s death in 2014. These include in particular a work entitled “And And And And”, consisting of four parts: 1) “Non-Repetition” (the philosophical part, which remained fragmentary), 2) “Offices” (poems), 3) “Beings” (poems), and 4) “Hubert of Calverley” (play).

Volker A. Munz and Bernhard Ritter